Elevations Connections: Back to School 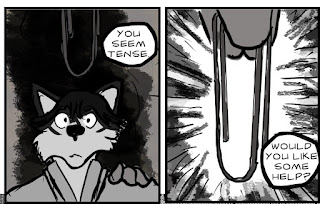 If you used a Windows device between the 90s and mid-2000s, you'll understand Terry's next actions.

Sooner or later I'll get back into the Monday-Wednesday-Friday Schedule. I was originally slated to begin Act 2 this month. Life is weird, and I have been giving the office day job higher priority and getting myself more attune to that environment. Combined with the weekends abroad, time was cut short... I hold myself accountable for my own misprioritization.

While I had no real plan in mind for Terry's (or rest of the cast, for that matter) educational life, all students are in the arts and entertainment field. The school's design itself is loosely based on Cogswell Polytechnical College, which I briefly went to in 2013. A lot has changed since and even that very same location has since been razed for tech offices.

I was going to make the reference more obvious, with centralized roundtables of art supplies and computers, to emulate a private art school, but figured a more general representation of a mini-lecture room (as well as omitting any sculptures/random art projects) would make better sense in the long run.

The students and faculty were drawn in at last minute. Most extras are just that - random animals at best. I'm hoping to polish them up beyond a quick scribble for the published version once I finish Act 1 this summer.

Yes, there is a reason Andrew, a coyote, takes notice towards Terry's Medallion. 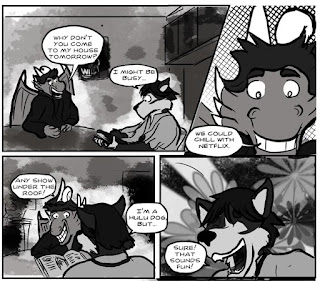 This was the original dialogue for Page 45

Peter Peithos is a peculiar dragon in the sense that he's the most toned down of the entire cast so far. The original dialogue hints at his ulterior motives (based on the 2015 slang of "Netflix and Chill"), but was changed during drawing to be more general for 1) Avoid a dated euphemism in the future and 2) Potential copyright issues.

Also, I didn't want it to be obvious that the dragon was (originally design to be) a pervert that creeps on his next suspect. I'll leave that to his character index url name. In his next appearances, I'll dive further into what had changed for him in that context.

Mike Folf
I draw, I write, I travel, I make con panels, I marf, I do bad puns! CanisVulpes